Under the baking bell

In 2008 the construction of new multifunctional hall Krešimir Čosić at the sports centre Višnjik near the old town centre has been finished. The hall has the dome that is the largest one ever to be built in Croatia, and it's specific look that has already earned it the name "Under the baking bell" (the baking bell or "peka" in Croatian is a special kind of meal preparation under a metal bell that is covered with cinder). This will certainly make the hall one of the new city symbols. The hall has the capacity between 10.000 and 24.000 visitors depending on the type of event being held. This hall is one of the sport facilities of the Handball World Championship 2009.

HAURATON takes pride in delivering to this project the complete system of linear drainage channels FASERFIX SUPER KS 200 in loading category E 600 with the special KTL protection of the gratings and the specific GUGI-Ductile iron mesh grating design. The complete quantity was 800 m of channels with gratings and trash boxes that are built around the hall itself on the access areas for pedestrians, private cars and buses and in front of the main entryway in the hall and the VIP parking spaces.

The special protection enables the gratings to stay permanently black and resistable against corrosion caused by the sea air in Zadar. High loading capacities and durability on such a demanding surface is guaranteed by the steel anchors in the side walls of the channels and the high steel angle housings on top of the channels. The special design of the GUGI-Ductile iron mesh grating besides the aesthetics, provides better hydraulic performances in comparison with the standard grating due to it's high intake cross-section.

HAURATON Croatia is pleased that throughout all project phases, from the planning to the installation, they have been present on the project as proactive participants. This is the logical result of the constant presence of the local Sales Manager Željko Vuksan and the distributor for Dalmatia, company Tiss from Split in the city of Zadar, the long-term succesful cooperation with the architectural bureau Marinaproject from Zadar and world known architect Nikola Bašić who made the urban and architectural solution for the whole sport centre complex and the cooperation with the drainage planner on the project, Mrs Ankica Perović from company D&Z from Zadar with their owner Davor Uglešić. The project of the sports hall was made by prof.dr.sc. Marijan Hržić from Arhitentonski atelier Hržić who has great experience in planning of public projects.

Through the realisation of this project "circles have been closed" in Zadar. HAURATON channels of the same quality have already been installed on the large area of the Zadar peninsula, in the shopping centre, on several streets and many other places in the city. Through their functioning on the most visited parts of this both old and new town HAURATON channels are giving on the daily basis all the evidence about the level of their quality and aesthetics.

HAURATON elsewhere in Croatia during the Handball World Championship 2009

HAURATON is also represented on other sport facilities which are also host cities for the Handball World Chamionship. In the multifunctional sport hall Arena Zagreb, where the final games will take place, HAURATON channels were installed as well as at the Sport Hall "Gradski vrt" (City Garden) in Osijek.

The cross-section of the Sports hall 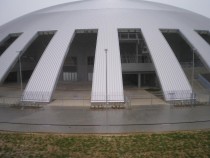 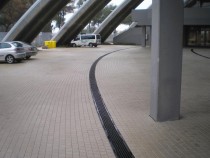 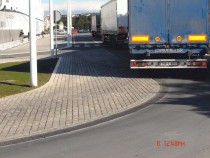